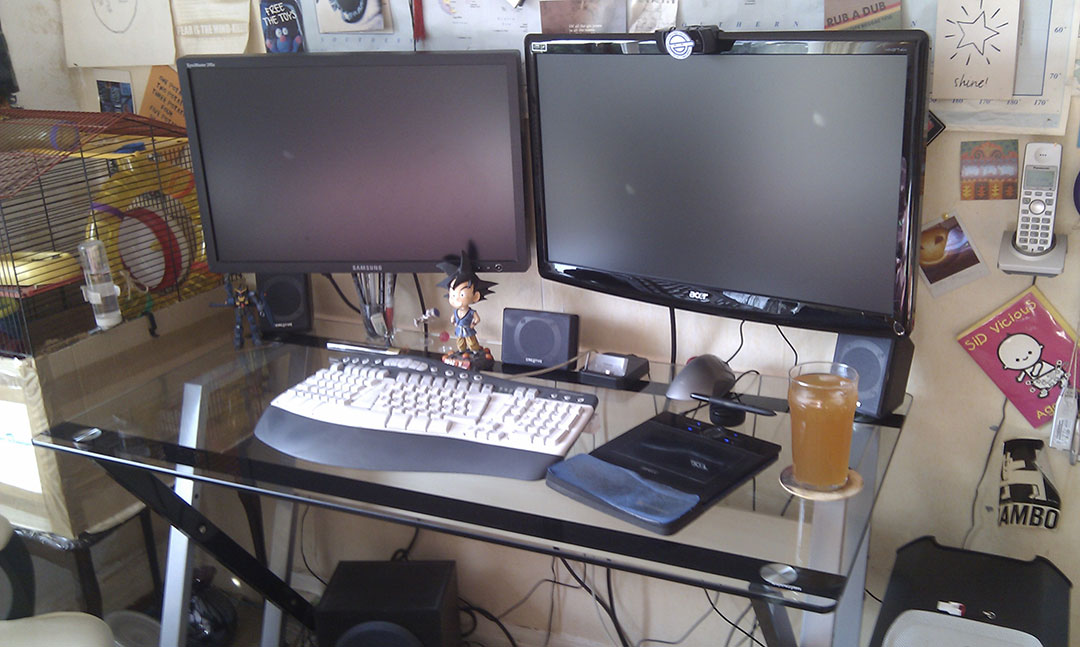 I only jumped on the dual monitor bandwagon a few months ago but now I see how hard it is to go back to a single display. I decided that the next “new” thing to try out was 3D and I also wanted a better monitor than my old 24″ Samsung Syncmaster 245B. The problem was that I couldn’t find a monitor with its 1920×1200 resolution at the same size and with 3D. Then out of the blue I stumbled across the Acer HN274H 27″ 3D 120Hz LCD Monitor. There are lots of reviews about it but there are lots of things that are not covered by most people. This is my first hand review as someone that has used it for a week on a daily basis for work and gaming.

Windows Vista x64 only recognised the display as a Generic Plug & Play Monitor which was annoying. I went to the Acer website and downloaded the latest drivers from here. Monitor->H Series->HN274H. The v1.0 drivers are not WHQL certified by Microsoft.

The first thing to note is that whilst the monitor has 3 HDMI v1.4a sockets, if you use them then you can only choose between two 3D resolutions in Windows. Both are crap. The first is 1920×1080 but it is meant for movies and locked at 24Hz which sucks for games. The other mode is aimed at games and is locked at 60Hz. The down side being that it only runs at 1280×720. The reason I read was something about the 3D Vision stuff exceeds the bandwidth limitation of using HDMI. The only way to have it working at 1920×1080 at 120Hz and in 3D is to use a Dual Link DVI cable.

If you plan on using this Acer monitor as part of a multi monitor setup then you may find that you can’t get 120Hz 3D mode working correctly. That’s what I found. I use the Acer 3D monitor as my primary and the Samsung Syncmaster as my secondary. Initially I connected both via DVI but the 3D Setup wizard thing in the NVidia panel refused to activate 3D mode. I found that if I cheated my way through the test and picked one shape for each eye and clicked next it would take me to a screen about flicker. When I tested the different frequencies the 3D glasses activated. I still couldn’t get it to work in a game. At this point I powered down the system and disconnected the Samsung monitor. That’s when I found that 3D mode worked fine when it was set to work as a single display. I then connected the Samsung monitor whilst the system was already booted up. 3D mode sort of worked. The 3D tests would work but Battlefield Bad Company 2 kept just flashing a white/black screen when I tried to load it. Turned out the Samsung monitor was set to run at 59Hz in the Windows display settings panel. When I set it to 60Hz and tried to load the game again it worked. Since then it’s worked all the time. I’ve restarted the whole system a few times and it still works.

The “Select when the display is in 3D mode” dropdown is disabled in dual monitor mode but enabled in single display mode. In multi display mode the greyed out box is set to “Only while 3D programs run”. The actual transmitters are in the top center of the monitors trim. I had to move my web cam to the side so it no longer covered them.

I have noticed quite significant ghosting in Bad Company 2, mostly when you have stark landscape and trees against a bright sky. The game is also much darker due to the 3D glasses becoming shaded when activated. The monitor is very bright to start with.

There are no physical buttons on the monitor. Along the bottom right front panel are 5 white dots, these are actually the touch buttons for the display. The first activates energy mode where you pick from one of 5 energy use modes. Mine’s on user since I tweaked my contrast to 40. All the energy modes seem to do is auto-tweak the settings to different brightness levels. The second button is the “Auto” one which lets the display auto size itself. The third button opens the settings panel where you can change the colors etc. The fourth one is volume control for the two crappy built in speakers, I muted it. The last one is for the Input selector. Be warned that this is instant. I made the mistake of pressing it and it changed to the HDMI input which I have nothing connected to. I had to unplug the monitor and turn it back on for it to auto-select the correct channel again.

It’s quite slow when you turn it on, takes about 30 seconds before it flickers to life. Takes about 10-20 seconds from standby.

The actual casing is a total dust magnet. It’s very shiny so the dust is very visible. My Syncmaster is sat right next to it and has nowhere near as much dust. I’m half tempted to say that it is in fact attracting dust to it via some left over static charge.

This guy talks you through how to access the service menu. I’ve copy and pasted it below in case his site goes down and I want to do this in the future:

Now I’ve got 3D working as I want I am very happy with the monitor and very much looking forward to watching Tron Legacy in 3D ?

Comments: None so far...be the first!

Leave a reply or [Cancel Reply]

No nation is fit to sit in judgement upon any other nation.